Water management organization in France divides the territory into hydrographic basins rather than its administrative units of departments or regions. The Rhone Mediterranean Corsica agency has the distinctive characteristic of involvement in two drainage basins: Rhone-Mediterranean and Corsica.

AREAS COVERED BY THE WATER AGENCIES

A drainage basin, or hydrographic basin, is defined as the whole of an area drained by a river and its tributaries. It has natural borders in the form of watersheds.
There exist:

In France water policies are managed on a basin-wide scale. These are the areas covered by water agency intervention in Metropolitan France. 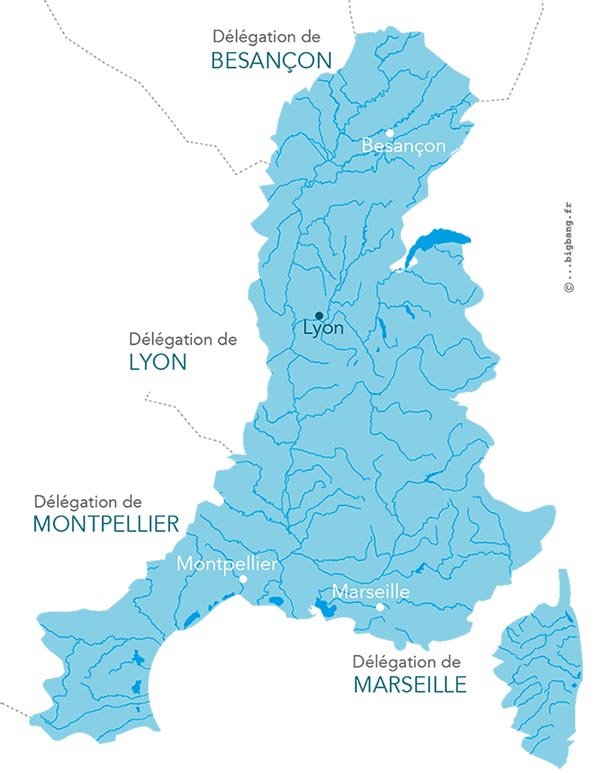 11000 : the number of rivers more than 2 km long in the Rhone-Mediterranean basin

≈1000 : the number of coastal kms covered by the Rhone-Mediterranean basin

≈1000 : also the number of coastal kms covered by the Corsica basin

Sea and mountain, rural and urban areas, 130 000 km2, i.e. 25% of French territory ... the Rhone-Mediterranean basin is vast and uniform. Water resources are significant but unequally distributed, with water shortages in 40% of the area. The Rhone, which covers 545 kilometers on French soil, is the structural axis of this area. The basin also enjoys exceptional quantities of lakes (Lake Geneva, Lake Annecy, Lake Le Bourget ...). The expansion of conurbations and economic and tourist attractiveness are a source of pressure on the environment.

15.5billion m3 of water stored by the glaciers

The Corsica basin - better quantitative sharing and preservation of quality

With 8700 km2 and an average of 32 inhabitants/km2, Corsica has the lowest population density of French metropolitan regions.  It is host to more than 2 million tourists every year. It has specific characteristics linked to its insularity: mountainous relief, high precipitation, dense hydrographical network, large coastal areas, high variations in flow between the rainy Autumn season and summer periods...

Water is in abundant supply but unequally distributed in Corsica. The area must continue its efforts to reach a better quantitative balance.

The exceptional water quality plays an important part in the island’s economic and tourist development. It must be maintained by strengthening the efficiency of treatment systems and avoiding agricultural pollution.